I went ahead and did some X-Men buttons, just to test the waters. I think my problem before was that I chose a not-as-popular or well-known character. So this time I chose Emma Frost, and I have done a great one of Wolverine I need to post. Emma’s gotten some good reactions so far. I also listed another Iron Man button; there are some more Captain America buttons that need to go up, and I still have to make some Thor buttons. Hard finding good images of Thor….I think it’s the sheer mass of him. I had the same problem with The Incredible Hulk. She-Hulk is much easier to work with. Red Sonja is doing okay, but I had rather hoped that she would appeal to both comic fans AND fantasy fans, and thus get more notice. (I was hoping Zatanna would do the same in regards to magic lovers and Las Vegas)

Moving away from Marvel…..my Green Lantern button is getting some notice. Starfire has been drawing some good attention, although I give more credi 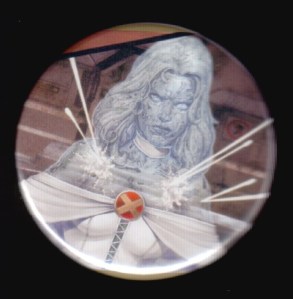 t to her considerable assets for that. Raven’s also picking up, and I am considering doing another button of her. That’s probably personal bias coming in–like Iron Man and Robin/Nightwing, Raven is one of the key characters that drew me in to the world of comics in the first place. I really should do some buttons of Robin and Nightwing, now that I think about it. Superman too; I’ve got Wonder Woman and Batman up, so I may as well complete the trinity.

On the villain side, I have two listings for buttons featuring Harley Quinn, one on her own and the other sharing space with The Joker. I plan to do at least one button of Poison Ivy, and if she gets a good response too then I might branch out into other Batman villains. Don’t really want to do one of Lex Luthor as I prefer more instantly recognizable characters. I’ll have to do more thinking on the villain side. Let me get back to you on that, okay?

This entry was posted in Etsy. Bookmark the permalink.